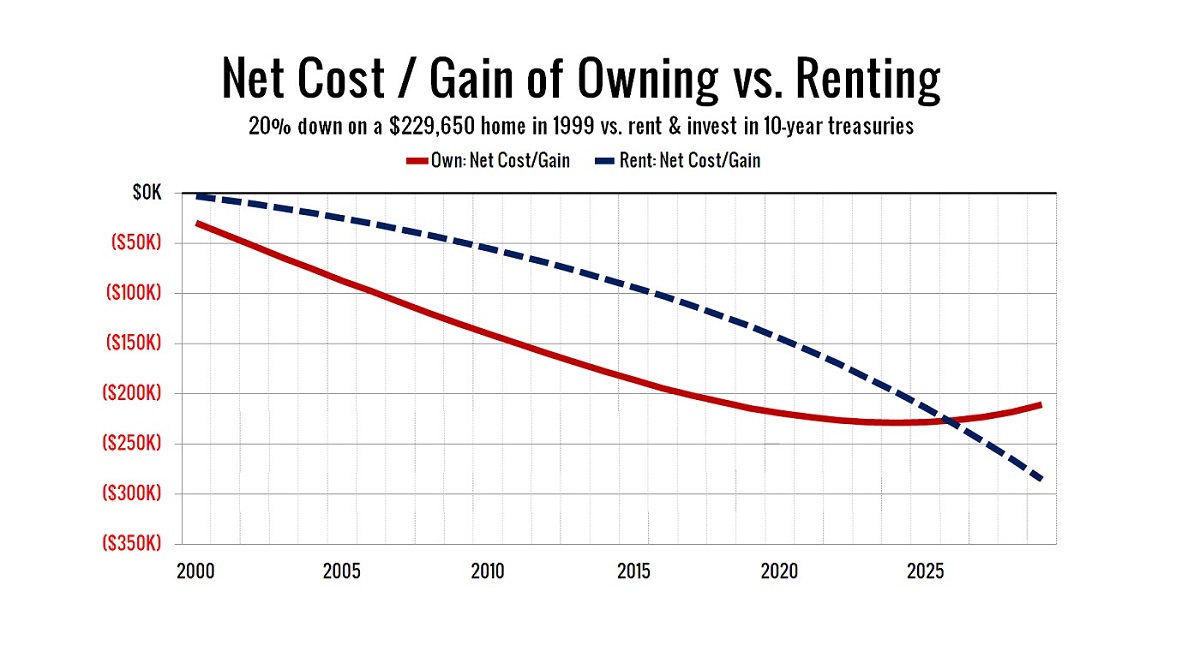 The question of rent versus buy has been wildly popular during the housing recovery. The historic housing crash at the end of the last decade came as a bitter shock to millions of Americans, many of whom never considered that home values could fall at all or that they could fall as far as they did.

The U.S. homeownership rate is still hovering near its record low, yet buyer demand has been steadily rising. Construction, however, has not been rising quickly enough to meet that demand, resulting in fast-rising prices. In the last few years, prices have increased faster than income and inflation.

In some markets, home values have hit record highs, again fueling the debate over which is more lucrative, buying or renting?

Rents have also increased dramatically, as new households are formed and millennials, now the largest generation, struggle to afford a downpayment. While there has been a building boom in luxury rental housing, that has not been the case with affordable rental development.

Still, researchers in the study claim the old adage of "throwing your money away on rent," doesn't hold up. That is because it assumes that the extra money a renter saves by not owning a home and not saving for a downpayment is simply spent on goods or services and not invested.

"When you assume that those monies are reinvested at a rate of return, renting, on average, wins in terms of wealth creation," Johnson said. "Of course, many renters will not reinvest those monies and will instead use them for consumer goods, which is the least desirable option in terms of building wealth."

In other words, the rent argument only works if the renter invests the rental savings rather than consuming it.

Johnson and his colleagues also assessed price volatility. Some local housing markets, like Miami and New York City, are far more volatile than Kansas City or even Atlanta. The researchers therefore went city by city, measuring home price appreciation against a portfolio of stocks and bonds that were equal in volatility.

"To have a fair race, that reinvestment into stocks and bonds has to be as risky as that particular housing market," Johnson said.

While all housing has always been local, home price performance has been especially so following the recession. In the nation's 24 largest metropolitan housing markets, just four showed median home price appreciation between 2010 and 2016 that was higher than the median return of a stock portfolio, according to a report by Redfin, done in November 2016.

Three of those four were in Northern California, and the fourth was Miami. All four rank high among real estate investors, especially foreign investors, not owner occupants.

Nationally, since the recession, there have been two distinct housing markets.

"The first is the one that gets all the attention, where high prices, low inventory and strong buyer demand is supported by dirt cheap rates and high job creation and income growth," said Nela Richardson, Redfin's chief economist.

"The second market is in parts of the country [Trump country] where home prices never took off, unemployment is still high and wages are stagnating," Richardson said. "Prices aren't growing quickly in these places and there's been little home equity growth. The housing market mirrors the growing economic inequality in the country at large: Rich metros grow, poor ones don't."

When you consider that many Americans are not invested in the stock market, "the forced savings of a monthly mortgage is a key reason why housing has served as an engine of growth for the middle class over the last 50 years," Richardson added.

As long as home values don't fall, which has historically been the case in most markets, with the glaring exception of the last recession, homeowners are building a nest egg. They had also been getting a tax advantage. That is now at risk in the Republican tax plan, which curbs the mortgage deduction and in the Senate version, wipes out the property tax deduction.

Real estate can still be a good investment, according to Johnson, but not necessarily living in the home you own. Being a landlord or investing in real estate-related stocks and commodities can be more lucrative that keeping all your capital in the nest.